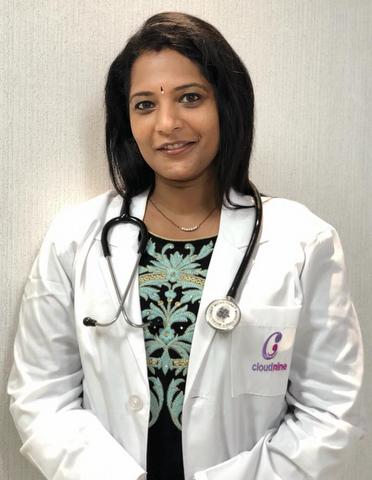 Treating exuberant number of high risk pregnancies makes her one of the most outstanding obstetricians in Bangalore. Her infertility treatment has made difference in thousands of couples. Experienced in performing difficult cases through minimally invasive procedures like Laparoscopy. Being a Robotic surgeon makes her a surgeon of the 21st century. She has advanced her expertise in various fields like cosmetic gynecology. Awarded diploma in Regenerative medicine in Infertility and Aesthetics by International Association of stem cell and Regenerative medicine. Her approach to her patients has always been with absolute care and concern.

She is a wonderful speaker. She has been invited by the TEDx as a Speaker- for ROBOTICS and by TED Circle for talk on "OUR BODIES" She has several awards to her credits. Just to name a few of her accolades: She has been the FOGSI AWARD winner- for contribution in OB-Gyn. She has Received Dr. Balaghangadharnath swamiji’s Samaj Seva award. She has been felicitated by Sangeetha Mobile ltd and by Hosabelaku Trust for the contributions in the field of “Women Empowerment”. She has received Chairman’s Award for Distinguished services Doctors at Narayana Health Hospitals (her previous institution where she has worked for 12+ years). She has also been awarded the Kempegowda Award for Samaja Seva. She has been awarded as a surgeon with Least Learning Curve for Robotic Surgery in INDIA-9/17 Recognised as CHD fellow.

She has been recognised internationally. She has Invited by MIT and Harvard University for Medical innovation platforms and she is a listed mentor for CAMTech. She is into Healthcare Innovations and has Patent on Medical devices. She has been Invited by Taiwan ministry of Exchange program in OBG. She is a listed Proctor for Robotics in benign gynecology across India. She has been a Principal Investigator for several Research Studies.

Has authored Chapters in Text Books in the field of OBG and Infertility. She to her credit has numerous scientific papers in National and International journals. She has presented several papers at State, National & International Conferences and also won awards for several Papers presented.  She has been invited and listed as Faculty for conference organised by various societies. Has successfully organized several Workshops & Conferences. She has also published numerous articles, health blogs in newspapers. She has rendered TV talks, Radio talks and You Tube health talks.

Dr. Lavanya Kiran is very helpful and humble, and makes us comfortable. She patiently explains how to go through the overall pregnancy journey and gives the right suggestion at the right time. Cloudnine has maintained its benchmark. And I am very happy with the service, and we recommend Cloudnine. Thank you

Dr. Lavanya is very supportive and motivating. The entire services and the staff members are very good. We had an awesome experience here.

Dr. Lavanya and the entire team on Cloudnine are very friendly and caring. The services are really good. We had a fantastic experience here.

Which city and centers does Dr. Lavanya Kiran practice at, on Cloudnine?

How can I book an appointment with Dr. Lavanya Kiran?

You can book a consultation with Dr. Lavanya Kiran via ‘It’s our baby app’, through the Cloudnine website, a phone call on the customer care no, or directly from the hospital.

Why do people consult with Dr. Lavanya Kiran?

Anytime via ‘It’s our Baby App’ or Cloudnine’s website.

What is Dr. Lavanya Kiran a specialist for?